Veteran Nolan Raihania charms the Italian crowd with his rendition of Italian classic “Mama” at a gathering during a C Company veterans’ tour in the 1999.  To his right veteran Tini Glover encourages the audience.

"Mama" is a popular song written in 1941 by Cesare Andrea Bixio. It has been performed by many singers over the years. 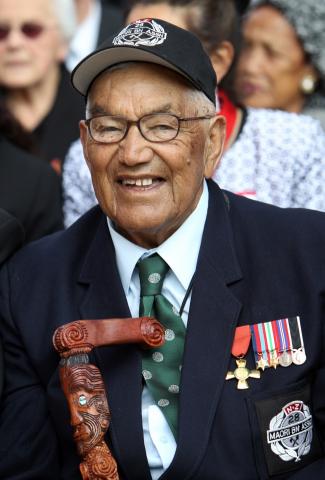 C Company veteran Hingangaroa Smith recounts the action to capture the casas Pogliano, Baccarina and Della Cura near the towns of Forli and Faenza undertaken on December 14th, 1944. Veteran Nolan Raihania to his left provides support.

This footage was taken at Casa Della Cura during a tour to Italy in 1999.

Hinga Smith: The railway line is there. 15 Platoon came down that side. 14 come down the middle and we come down the side there, 13. Ah, when they got to this house there were some Germans here and tanks and there were. And they got into a house over there, Lt Paniora, and uh and uh Sam and uh

Hinga Smith: Anyway there were a few that got caught in there. But the Germans were in there and the tanks around the back. But these fullas come out, these Germans had started stretching themselves and uh it was too much for those fullas in that house over there, they shot him. From there, from the house. And that’s when the German’s brought their tanks and blew the house down. With the fullas in it. But later on, in the afternoon, we’d uh, we called for smoke to come down and cover all this area so we could take off up the way we came. And we ended up that night being back where we started from.  Because these Germans in here held us up with their tanks.
If I, if I could see the fulla that owns it.

Nolan Raihania: We can’t fight next [?]

*Hinga Smith: 13 was over there boy, in the house over there. We had to leave that house where these fullas [unintelligible]. Couldn’t get this house. Is the main road ... was along there somewhere ne? Is the road along there? He rori kai mua? Well that’s the road we were trying to cut.
And Sam and them was killed in a place away from this. If that fulla said there was a house over there, well that’s it.

Nolan Raihania: The house is not there now?

Hinga Smith: No it’s not there.

*Hinga Smith: We left up there about 6 or 7. We came down the road, there used to be vineyards all the way up and we came down the tracks and the German’s had sown mines along the track, especially where 13 company. Blew fullas legs off, like Rongo, no Sam, Sam or Rongo or Peter’s. One of those fullas legs, it was here. And there were some Germans in the haystack over there, yelled out to ‘Comarade’ when we went past into the house.

Hinga Smith: Yeah up in the hill.

Monty Soutar: The one they called Ruatoria?

Hinga Smith: Yeah, yeah, that’s it. Yeah, up there. Ruatoria’s up there. That’s where we all started from.  When we came here, we came around the back and over there.

Taina McGregor: Why did you fullas call it Ruatoria?

Hinga Smith: Well, we had to have a starting line and uh, and uh

Nolan Raihania: That was the code name

Hinga Smith: That’s the code name we had.

[They couldn’t break the code]

Hinga Smith: It would have been alright in that house if they hadn’t shot these Germans that were walking around here. Yeah, if they’d left them alone, they wouldn’t have known they were in that house. Everything would’ve been alright. 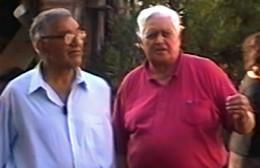 Veteran Nolan Raihania recites ‘The Ode’ at the Florence War Cemetery during a tour undertaken by C Company veterans and their families to Italy in 1999.