Bill's mother was Hera Maraea of Ngapuhi. When Bill was 3 years old his grandfather Hohepa died. He and his mother then moved to Papa Aroha. When he finished school he went to work on the scows up and down the country and in Australia. In his younger days Wiremu was a talented rugby player. He married and had eight children and many grandchildren.

I grew up in Panmure and through my Dad, knew some of Mr Mrs Williams children. From what I remember, Mr. Williams was such a humble man and a hero; not just because he was in the 28th Maori Battalion, but the way he held himself. Ka mihi nui ki a koe.

Uncle Bills 101 29th November and his Loving wife Alice is 88 same day. Happy Birthday and Bless you both. I came from Australia to share their birthdays last year 2008. Our family grew up in Alamein Road Panmure, The Williams family were in Larsen Road. Our families first met at the Transit Camp Western Springs. Auckland, 1949, before shifting to Panmure, though Aunty Alice worked for Clothing Company Greers Ponsonby where my Mothers family the Bouchier girls and Uncle Ron Russell worked with the Griffiths girls during the war and after. The Transit Camp was used by the American Troops then handed over to Housing Corp. This camp, I found out at the Birthday, after all these years, was for the housing of non whites and mixed marrage families before being given State Houses. How bizzare is that, My family were from the Pacific Islands. No one thought it a problem back then, No regrets, if it never had not happened, we would not of had the pleasure and priviledge of knowing Uncle Bill, Aunty Alice Williams and wonderful family. We grew together, with Love of each others differences. Also fond memories of Ruka, Galvin, Rata, Tawhai, Lazaras, Hollis,Toia, Thompson, Betham, Callander, MacNamara, Craven, Wright, Murray, Carter, Hoet, Pye, Gordine, Roberts, Greenslade Tindals, Lamb families, where ever you may be. Those were the days.

Yes I remember all those

Yes I remember all those names and whanau with fond memories. Dad (Tom Ruka) and his brother started a barber shop at Camp Bunn about 1949. We stayed there then moved to a new statehouse in Oran Road. When the builders found out dad was was an ex.POW captured on Crete, they put the Creteion emblem of olive branches in the plaster finish of the house. A big part of Camp Bunn burnt down with Mr oakley Brown's Picture theater in early 50s. Panmure was rocking in the fiftys and sixtys with some 3,000 plus ex. servicemen and lots were 28th from all over the motu. Sly grog, parties, lots of clarinets, guitars, saxpphone and accordians singing Italian songs. God bless you Uncle Bill. Millan Ruka and whanau.

Loverly korero Tony and we

Loverly korero Tony and we remember your whanau - my dad in 28 MB and we started at Camp Bunn too.

Hope im not intruding or if u will read this but your post brought back lots of memories..we to started transit camp w/springs,me older brother mum ( A single mum,frowned upon in those days !..we got a state house,about 1950 .in Benghazii rd,,ran off Alamiwn Rd.just had to cross rd to get to school ,Tamaki primary ,Tamaki intermediate..swimming Tamaki river. Oakley Browns theatre Saturdays.ok cheers for now 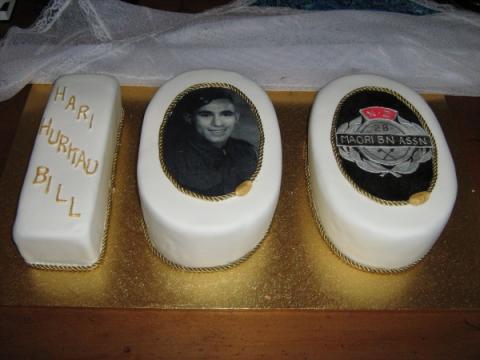