This is a tribute to my Grand Uncle commonly known to the family as ‘Uncle Sam’ but to our generation he was ‘Koro Sam'. I have positive and clear memories about this amazing Grand Uncle and Kaumatua his full name was Samuel Tutaua Tarawhiti he was the youngest of Nuku Tipene Tarawhiti and Tukotahi (Te Kawengaroa) Rangiwhetu. He was the youngest of 13 children. He came from Waikato and Taranaki and his tribes was Ngati Whawhakia and Nga Ruahine-rangi.He lived in a small South Taranaki settlement called Otakeho.

As a young boy, Koro Sam attended Auroa School. I remember clearly a story that was told to me as a young man from my father, my uncles and aunties about the time when Koro Sam was very sick, so sick that a bed was made for him in the lounge of his home, expecting the worst scenario.  His parents in accordance to Maori Custom sent for a tohunga that came from Parihaka, when the tohunga arrived and saw how unwell Koro Sam was, the tohunga immediately went and bit Koro Sam on the forehead. The next day Koro Sam was up and walking around in good health, eating, talking and laughing yet the night before he was knocking on deaths door, Koro Sam confirmed what I had been told was true his words to me was "for sure".

Preparing to leave for overseas with the Battalion. Before he left home he was told by his mother that if he did not marry and remained single then she would leave her land for him. This was a promise that Koro Sam kept until he died.

Koro Sam was attached to D Company 28th Maori Battalion later on he was attached with Major G Bertrand. while he was serving overseas his mother Tukotahi passed away on 12 th December 1943.

On one occasion when Uncle Sam was home on leave he had overstayed his time at home and was then considered as AWOL, the MPs came to the house to find him, Koro Sam hid behind a door when the MP's arrived his niece Minnie a liitle girl at that time overheard the MPs saying they were looking for Sam Tarawhiti, not knowing and thinking it was game she innocently yelled out "there he is behind the door!" Koro Sam was taken into custody and returned back to camp.

His name appeared on the Auroa Community Roll of Honor. This was for those soldiers that served during the war and returned home. His name was inscribed on the memorial tomb as"Sammy Nuku "

After the war Koro Sam returned home and stayed with members of his family I remember this Kaumatua staying with us in Tauranga, every day he would make his trip down to the RSA and we would not see him until closing time. Koro Sam could play the piano and was an awesome cook he made biscuits, cakes and pikelets he could play the piano and would play the piano down at the RSA or in the pubs that had a piano. His favorite song that he would sing to was "Welcome Home". Only on one occasion did Koro Sam talk about all his experiences with the 28th Maori Battalion in the "Walkabouts". He told me about the time that they had a pig and cooked it in the hangi, and the pig was placed on a Red Cross stretcher and taken back to camp covered by a white sheet described as a KIA (Killed in action).

In 1977 when my Grandmother died Koro Sam wore his Blaza with the 28th Maori Battalion monogram he also wore his dark sun glasses like those that was worn by Bill Hayley and the comets.

Koro Sam shared with me some valuable advice and that was to avoid any hangovers from a night on the grog........he said "have a big feed"!

I replied are you sure Koro Sam...! And he said "For sure" 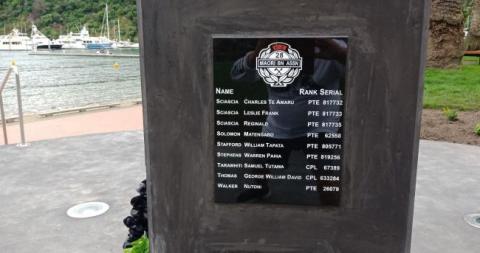