Leaving College Kia worked for the Hikurangi Diary Factory until he enlisted in the Army. He was with the Engineers at Ngawha Springs, sailed to the Middle East with the 10th Reinforcements and joined 'A' Company of the Maori Battalion in Italy. After Cassino Kia proceeded to Aldershot in England where he was commissioned. He returned to New Zealand with the Battalion and served with the Occupational troops in Japan.

In 1947 Kia Rika who had been recruited to Rugby League by the Halifax Club played in the British Cup Final at Wembley - a highlight in any footballer's career. A crowd of 70,000 saw Halifax go down to Bradford Northern. Retired from football, Kia became Manager of two hotels in Halifax. He married, fathered four children and all in all lived in England for 28 years before returning to New Zealand with his wife Jean and their two youngest.

Returning to Whangarei Kia was soon back into Rugby League on the Northern Board of Control and as Manager of several Northern Representative teams. In September 1988 Kia took a trip down memory lane when he returned to Great Britain as a Guest of Honour at the Halifax Club Reunion. He was not in good health when he revisited his old haunts in the UK but was sustained by n1eeting old friends and family.

After his return home his condition deteriorated and in five months he was dead. He will be remembered for his undoubted physical prowess and his never failing kindly nature. 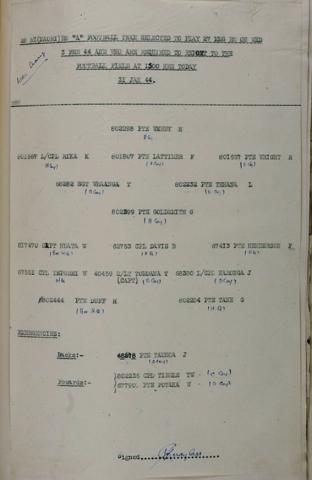