Because he was a school teacher for many years it wasn't generally known that Humphrey Dyer started his career as a professional soldier. He was the top cadet at the Duntroon Military College where he was awarded the Sword of Honour in 1918.

Except for short periods of special duties and as Battalion 2 I/C, Humphrey Dyer spent almost two years as O.C. 'D' Company with whom he became closely identified.

As a disciplinarian Humphrey was in the Dittmer mould, his adjutant was Ace Wood, the Battalion's original RSM; the Battalion had performed very well in Greece and Crete and the Libyan Campaign, and now seemed set for still greater things. So it was particularly unfortunate that Dyer's position with regard to captured enemy weapons should have become so uncompromising.

However, he asked to be relieved of his command, and in so doing made way for the Division to appoint its first Maori Commander.

Freyberg on resignation from command

There are various stories current of this resignation. I had a surprising encounter with General Freyberg in the summer of 1955, when I was teaching at Eton College in England and Freyberg, then a warden at neighbouring Windsor Castle, was living in the Norman Tower. He clarified the history. As a young teacher I had been on duty at the Eton College Fourth of June celebration, always attended by the Queen. I was placed in the section adjacent to the Queen’s marquee. From my section a drunk party started a game to see who could hit the pole of her marquee with an empty bottle. Startled, I saw the headlines, “Queen assassinated at Eton College while young New Zealander stands idly by”. I raced for help and had the drunks escorted out. A few weeks later my Headmaster called me in to say that the Queen had asked Freyberg to invite the “young New Zealander” to dinner in the Norman Tower. I went in some doubt of the outcome. The dinner was full of old generals and brigadiers reminiscing about the war. I was seated on Freyberg’s right as the guest of honour, and he presently turned to me and asked if this was boring. “But did you have a brother or father in the war?” “Yes, sir.” “Was he an officer?” “Yes, sir.” “One of us probably knew him. What unit was he in?” “The Maori Battalion, sir.” “You are not a Maori are you?” “No, sir.” “Then he was an officer early in the war.” Danger was approaching, “Yes, sir.” “What did you say your name is?” “Dyer,sir.” The table froze. I had no idea my father was so important as to cause this reaction. Freyberg offered me an escape, “You said your uncle?” No, I was British. I would not accept this flight, “No, sir. My father, Colonel Dyer.” The officer across the table was lifting his fork to his mouth. Fork and hand froze. I stared at the fork, not daring to look around me. The pause seemed to last 10 minutes. It was probably no more than 20 seconds. Freyberg lifted his glass and broke the silence, “We toast him. He was a good soldier.” He turned to me and asked quietly, “I know you have some questions.” “Yes, sir.” “We will talk later.” And the dinner went on but noticeably less vibrant. In conversation I said I had heard different stories of his resignation and his firing. I did not know the truth. “I believe he was not fired over the captured arms.” “No, but he had disobeyed an order of Brigadier Inglis, who was present, to surrender the arms. I had no choice but to support my Brigadier’s order.” “Then Inglis left the room?” “Yes. Your father talked of the attitude to the Maori as cannon fodder on Crete. That was unjust.” His eyes were tired and full of despair. Did he actually believe it was true? Old generals must have many weights on their mind. My heart went out to him. “I told him he had no choice but resigning his command. I promised to find him another post. He demanded that he be replaced by a Maori commander. He said that the pakeha could not understand the traditions of the Maori, and did not know when they were violating Maori custom. I promised to replace him with a Maori. We parted heated but in mutual respect.” “He was appointed Base Commander at Maadi. But then he was fired. He had called you a racist in public.” “Yes, no general officer can permit an officer to criticize him in public – especially one so much loved by his men as your father was. I had no choice.” “Diagnosed as shellshock, so that no one who would believe what he said?” He closed his eyes, and the conversation was over. He sent me Christmas cards afterwards. He knew that his honesty had earned and won my respect and love.

A comment from Rob Dyer:My father talked occasionally of Nukutauroa and taught me the prophecies of Toiroa Te Tua, so dear to Paul Delamere and Te Hererangi Hook. He would say that New Zealand would become one nation, free of its crippling past, when the mana of Glastonbury was joined to the mana of Nukutaurua. It was to that dream, born in the months of an impossible love, that he wished to dedicate his son. He would describe the two traditions as two streams flowing down from ancestral mountains and joining to form a single wide river, flowing always towards the ocean of the future and towards future homes hidden within the ocean. He described it as his vision of te mana marewa. I was reminded recently of two long conversations with Dan Davin about my father’s vision of this united mana. By an odd coincidence the novelist C.K. Stead has chosen to draw his central character in a recent novel, Talking about O’Dwyer (London, 2000), from characteristics of these two men and from events in their lives. I do not find any trace in that novel of the characteristic that they both shared or of the debt that Davin felt towards my father. Dan took the opportunity to tell me, while I was at Oxford University, where he worked for the Clarendon Press, of what he had learned from my father of mana. He told me that the pursuit of this quality had been a goal of his life and that my father’s words had helped him through times of disappointed ambition. When I write of my father’s definition of mana, I am conscious that his own words are transformed by the experiences Dan and I have had as his pupils trying to pursue his vision. Humphrey Dyer’s vision of Te Mana MarewaTo bear always a sense of responsibility to the traditions of your ancestors and of the wise men who have taught younever to try to excel othersalways to strive to excel your own human limitations, for it is this never-ending pursuit that grants spiritual powernever to search for the social rank and position that are won by deceit and ingratiation •to be ready always to assist those who seek advancement, as teacher, friend and counselor •always to seek the safety and success of others before your own safety or success, especially in danger and moments of crisisto tell as story and history only parables of healing, regeneration and comfortto replace hatred by love and forgiveness, judgment by parableto ignore the judgment of society in assisting others and being true to yourselfto expect always the same qualities in others but to judge no one for themto remember always the mana of great men such as Rangi Royal and Sir Edward Dyer, and those in whom you find it, irrespective of their rank and race.I am grateful for all these words and for those in whom I have found these qualities: in two great Maori families, those of Paul Delamere and Te Hererangi Hook; in my Scottish mother’s cousin, J.B.S. Haldane; and in three pakeha New Zealanders who taught me mana not only by their words but by their example of it, Rex Fairburn, Dan Davin and H.G. Dyer.

"In the 1950's I was lucky enough to know two members of the 28th Battalion - Lt.Col. Humphrey Dyer who was one of  my teachers  at Whangarei Boys High School, and Charlie 'YM' Bennett, MBE,  who was United Maori Mission  Hostel manager at Whangarei.  Unfortunately, I don't have any photos of these men - only very fond  memories of two great men who were proud to have served in the 28th."

I'm a 42 year old school teacher from Wellington, N.Z, looking to have a conversation about the novel "Ma Te Reinga" by H.G.Dyer. In short, it would be great to open dialogue toward republishing the Commander's astonishing portrayal of life in the trenches during WWII.

However, am weary of steppping over the line, so to speak, if such a request is contrary to Mr Dyer's descendants wishes.

Please get in touch if we can simply discuss this issue with all due respect.

Dyer as we knew him, as pupils of his.

Humph, as we knew him, had the most piercing blue eyes, he carried himself erect. He could be diverted from Latin to talk about many things, challenging us, leading us. he produced the back of an exercise book with some lines drawn on it one day, "What Is this?" It had an N at the top of a line through central axis, and the other lines radiating from a point on this central axis had numerals 6 to 11 on lefthand(?) side, 12 with the N and 1 to 6 on righthand(?) side, and a hole about 8 mm diameter where these lines met on the central axis. I profered, "It looks like a type of sundial". "It is a compass we used to cross the desert, the issue compass was based on magnetism and the trucks we were in being steel upset the compass, so with a pencil through this hole and a watch we knew where we were, and could meet up after several hundred miles of desert crossing." He gave credit to the 'Maori boys' for finding creative solutions to the problems they faced to survive under atrocious War conditions. He was in his sixties when he taught us, and could do one armed chin ups on the classroom's door lintel. A truly remarkable man, I have read his self-published book and feel each chapter about the characters he fort beside, should be read on Anzac day, Lest We Forget what great men have gone before us, and provided us with examples for our own lives, I Remember Him.

In 1945 at the Whangarei Boys High School Humph taught me Geography and History, and all the class always paid attention to him. He was a good teacher,and with those piercing blue eyes, when he stared at you there was something wrong. But he always got the answer he wanted. He rarely talked about the War, but when he did so us 15 year olds were always curious to know more, but he wouldn't say more than what he wanted to. All the 5th and 6th formers were in the school cadets, and we used to parade regularly and he was our CO and wouldn't stand any nonsense from the platoons.It wasn't until well after the War that I learned what a great soldier he had been. He would have been one of the New Zealanders evacuated from the southern side of Crete by the British Navy 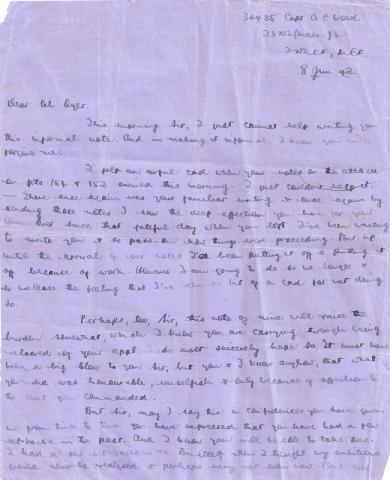