George Niania came from a line of warriors. His granddad and dad fought side by side in France during World War 1. George himself won a military Medal for bravery in the Italian campaign in World War II, and his son George Junior is an army man too.

After the war George never missed an Anzac Dawn Parade in 53 years, and if you wanted to know about 28 Maori Battalion Association happenings around Wairoa, he was the man to see. But there was much more to his life than army.

There was Kahungunu business. He was in the Tairawhiti District Maori Council and the Wairoa District Council's Maori Committee. On the Lake Waikaremoana Maori Trust Board too.

Hori Tawhao Tawhirimatea Niania was born at Papawai marae in Greytown in 1924, the son of Matiu and Pare Nia nia. He had ties to Ngatai Kahungunu, Ngati Ruapani and Rongowhakkaata. He was raised in Te Reinga, inland from Wairoa, during the depression, and had quit Te Reinga Native School at 14. The whanau survived by living off the land, and those tough years burned the "Waste not, Want not" lesson into him.

In 1938, George went to work for his grandfather, Ihaka Ranapia, building bridges, and tackling other carpentry work. He also did spells as a shearer, labourer, fencer and truck driver.  He was just 18 when he married Girli Kokiri of Mangatu - and he was 18 when he volunteered for the army.

He fought with the D Company's 16 platoon - and returned home, in time for his 21st birthday. George and Girli raised a family of four boys and four girls, and he continued working as a fencer.

In 1961 he became the manager of the Tauwharetoi 3B1 and adjoining blocks, a 2700 acre Maori Incorporation in the Ruakituri Valley. He served the incorporation for 25 years, helping manage the Tahora and Mangapoike Blocks and the Manu Oha/Paharakeke Incorporation until his death.

George also set some kind of record as a chairman of Te Reinga School. He held that responsibility from 1961 to 1986, when the new boards of trustees came in.

George was buried on the hill above Te Reinga marae. He is survived by Girli and seven of their children.

Private Niania was a member of a coy which entered heavy opposition at the Scolo Tratturi Canal, on 11 April 1945, where four German machine guns commanded the banks, making further advance impossible. The platoon on the right of Pte. Niania's platoon went to ground and a coy of the battalion on the left was pinned down. Without hesitation and with complete disregard for his own safety Pte Niania (who was acting as section leader) led his section forward, charging the forward bank of the canal. He himself wiped out the two remaining posts. Eleven Germans in all were killed, Pte Niania killing five himself. After the bank had been cleared he charged on for five hundred yards, clearing houses and taking four prisoners. This gallant action by Pte Niania was in great measure a vital factor in allowing the advance of the coy to continue thus permitting them and the troops on the rear bank to advance to their final objective, the river Santerno.

This is my Father-in-law.

This is my Father-in-law. My Husband is the eldest son, George J.M. Niania and he was a Captain in 1RNZIR serving in Singapore 1974-1976. On returning to NZ, he became Adjutant of 6 Hauraki Regiment from 1976-1979. He also passed the SAS selection in 1977. He left the NZ Army in 1979 to go home to Te Reinga to help on Tauwharetoi Farm with his Father and Brother Richard. We now live in Laie Hawaii with our daughter, son-in-law and 3 Grandchildren. 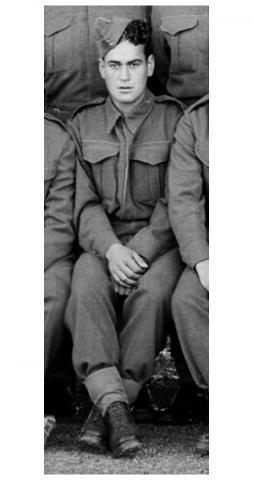