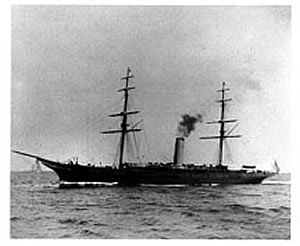 The Hellas was a large steam yacht, measuring 94 m in length and with a beam of 12 m.

In the early hours of Anzac Day 1941 the Second New Zealand Division was hurriedly extracting itself from Athens after the Allies’ ill-fated attempt to defend Greece from the German invasion. The evacuation from Greece’s southern ports had begun the previous afternoon, 24 April, but had ended disastrously when a number of civilians, sick and wounded soldiers and able-bodied Commonwealth troops, including New Zealanders, had tried to embark from the nearby port of Piraeus.

A large Greek yacht, the Hellas, arrived unexpectedly in Piraeus harbour, reporting that she could steam 18 knots and take 1,000 passengers. She was instructed to sail after dark, loading to take place as quickly as possible. About 500 of the British community (mostly Maltese and Cypriots), many despondent, decided to leave in this ship and about 400 sick and walking wounded cases from a British and an Australian hospital were sent on board. Crammed aboard with them were New Zealanders —75 men from the 4 Reserve Mechanical Transport (RMT) Company and a similar amount from the 28th Maori Battalion.

While people were boarding, the Greek skipper and his crew slipped away in the crowds so the Merchant Navy seamen from vessels sunk earlier by enemy aircraft took their places.  At 7 p.m., just before sunset, when the Merchant Navy officers were deciding how to get the ship to Egypt, seven Stukas came in flying low and fast.  The Hellas carried guns fore and aft so was a legitimate target.  Five bombs struck setting the ship on fire, three bursting alongside on the jetty.[1] The only gangway was destroyed and passengers were caught in the burning cabins. There were no hoses working on board at all and none available from the jetty until nearly an hour afterwards.  Eventually the ship rolled over and sank. A British colonel, who was on board at the time, thought that 400 to 500 people must have lost their lives. [2]

The Kiwi fitters, electricians, blacksmiths, coppersmiths, carpenters and storemen of the Workshops Section of the RMT Company had been repairing vehicles in Athens alongside a British Army unit for almost a week when they were directed to the Hellas. Their commander, Captain Broberg, had been appointed officer in charge of troops embarking.

The Maori infantrymen and their mortar platoon, on the other hand, were there by chance. In the withdrawal from northern Greece their instructions were to follow the truck in front but during the night the Australians, seeing a break in the traffic, took to the road and this led to some of the Maori trucks following the Australians to Piraeus instead of Porto Rafti. [3]

It had been the wounded, walking and on stretchers, who boarded the vessel first. They were followed by women and children, then other civilians, and finally able-bodied servicemen crowded into the yacht.

As the Stukas dived the first time they fired their guns cutting bullet holes through the deck and through those who were unlucky enough not to find cover. Many rushed down the gangway to the lower deck while others dived overboard. As the planes climbed and banked the mass of people lay on the lower deck waiting for the next salvo, that of bombs. “I joined a couple of Aussies on the deck,” recounted 21-year-old Frank Gill of the Royal Engineers on the BBC People’s War website. “The first bomb was ours, the deck heaved and we floated on air then the whole world came tumbling around me.”[4] The British soldier found himself buried beneath a mountain of debris, the two Australians dead beside him. One of the Maori boys, Charlie Horne of Gisborne, who had dived overboard, had done so right where the next bomb struck.  He was killed as was a Maori corporal below deck, Mita Tahata of Ruatoria.

Flames were everywhere enveloping the ship. The heat was overpowering and boiling water from fractured pipes scalded the flesh from people’s bones. “I could see a woman with both legs trapped and her body engulfed in flames,” recalled Lance-Corporal Gill “She disappeared as the deck collapsed beneath her.” Ammunition that had been brought on board as a means of defence began exploding with the bullets flying everywhere. The screams of survivors were heard amidst the flames as they fought to get off the remains of the ship. “Hundreds of soldiers and civilians lay dead below,” recalled Gill, “and one unforgettable sight, that of a girl pinned to a cabin door by a piece of shrapnel through her stomach, remains clearly in my mind.” [5]

Soldiers and civilians in the water, who had dived or been blown overboard, struggled to stay alive amongst the many who had been suffocated by oil. For those who made the jetty it was not over yet. German sympathisers were firing at the survivors from the roof of a building and soldiers, who had survived the horrors of the ship, soon lay dead or wounded on the road. Percy Goldsmith of Ruatoria was one.  His mate, Miki Harrison of Waipiro Bay, found him fatally wounded with his intestines laid bare. “Oh, poor bugger,” recounted Harrison.

He called to me, ‘Brother, I’m buggered, shoot me, shoot me.  Come on, come on shoot me.’ And another Pommie boy came crawling up.  All his hands were shattered and half his face was taken off.  And I thought, well, if I have to shoot you, I have to shoot him too . . . . So I turned away from him and I could hear him say, ‘You gutless bastard.’

Another Maori lad, John (Bunny) Brown of Gisborne, was presumed killed and a number of others were wounded. [6]

The panic-stricken made for the hills while the wounded struggled into a nearby warehouse. Soon wounded men lay all around the shelter, many with terrible untreated wounds and blood flowing everywhere.

Commandeered vehicles were soon ferrying the wounded to hospital in Athens. Later most of them would be taken prisoner. As the vehicles moved out through the dock gates the casualties could be heard crying out in pain from their dreadful injuries. People stood crying and praying on their knees in a show of sympathy. [7]

Sergeants Messop and Delaney were found among the RMT Company’s dead as were five drivers – Thurlow, Hook, Austin, Allanson and Patrick.  Many more were wounded including their commander Captain Broberg. Staff-Sergeants Wilson and Cooney had organised rescue parties which did magnificent work, but over half the tradesmen suffered in some way from this disaster.  Of Workshops’ 75 men, 31 of them afterwards made it to Crete but only seven of them rejoined the section in Egypt after that campaign.  Virtually wiped out, the section had suffered over 90 per cent permanent casualties.[8]

Most of the Maori Battalion was evacuated from the Athens area to Crete aboard the Glengyle in the early hours of Anzac Day. They left behind 10 dead and 81 prisoners of war.  Of the 750 Maori Battalion members who served in Greece, today there are only three surviving veterans: Arthur Midwood of Rotorua, Arthur Brooking of Te Araroa (now in Havelock North) and Sir Henare Ngata (Gisborne).

In total 291 New Zealand servicemen died in Greece.  Another 387 were wounded and 1,862 were taken prisoner. Most of those who died on Hellas have no known grave.  Their names are recorded on the Athens Memorial which stands within Phaleron War Cemetery, a few kilometres to the south-east of Athens.

Listen to Miki Harrison's account of the sinking of the Hellas.