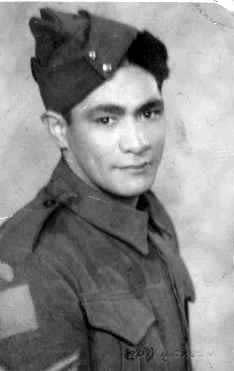 Interview between Patira Edwards (25844) and Megan Hutching about an incident during the Battle for Crete.

We took off into the hills, into the mountains. The first village that we came to, the Cretan people were running out and [they asked us] did we want anything to eat? They gave us Greek bread, and they were milking goats to give us milk. There was wine there if we wanted it. We thought we'd lay off the wine, but we had the rest. That's when they told us that the Germans had gone through that morning and taken all the food from the people. It was just what they had hidden that they had there [for us].

We stayed there quite a while until they gave us a guide to guide us to the next little village in the mountains. They said that that was the only way we were going to get out – these guides would take us from one area to another. That's how we got through.

From the collections of the Alexander Turnbull Library Oral History and Sound collection, OHInt-0729-08. All rights reserved. Permission of the Ministry for Culture and Heritage must be obtained before any re-use of this sound file