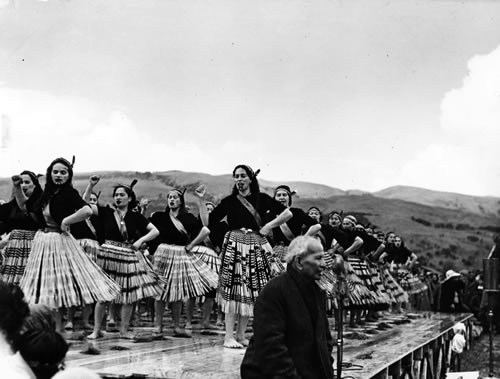 Women of Hikurangi section of Ngati Porou perform an action song during the great hui held in Ruatōria on 6 October 1943 to honour Victoria Cross winner Te Moananui-a-Kiwa Ngarimu. Sir Āpirana Ngata, the master of ceremonies on this occasion, is at the microphone in the foreground. Woman at this end of front row is Hakuwai Reedy (nee' Haig). Woman at this end of second row is LouieTuhura (nee' White).

On 4 June 1943 news was broadcast world-wide that 2/Lt Te Moana-nui-a-Kiwa Ngarimu had been awarded the Victoria Cross for his role in the attack on Point 209 at Tebaga Gap, Tunisia. It was the sixth VC to be awarded to a New Zealander in the war, and the first to a Maori soldier. The significance of the decoration, won at the cost of young Ngarimu’s life, led to a very special hui in New Zealand later that year. The public investiture ceremony was held at Ruatoria, Ngarimu’s home town. At the time it was one of the largest and most fully documented Maori gatherings ever held.[1]

For the Maori people the significance of a public ceremony went beyond Ngarimu’s honour, although his outstanding bravery and supreme sacrifice were obviously important. The hui signalled ongoing Maori support for the war, boosted the morale of Maori communities whose men folk were dying, and served as a reminder to the government of Maori readiness to meet their Treaty obligation even with their lives. (Fifteen per cent of Maoridom was now voluntarily under arms, and many more were contributing to the war effort in non-military roles.) The ceremony doubled as a tribute to the magnificent part played by the Maori Battalion in all the operations of the Second New Zealand Division, as well as acting as a form of public mourning for the fact that no bodies had been returned to New Zealand.[2]

Whakarua Park, the venue for the investiture, was a flat area the size of three football fields with a pavilion. After a major makeover it comfortably catered for the 7000 people, including 1300 schoolchildren, who came from all parts of the country. Three hundred performers had been brought together from the Gisborne district alone. At least five canteens were erected to feed the visitors and a camp for the Home Guard and other army personnel was set up in the grounds.[3]

Te Whanau-a-Apanui and Ngati Porou, led by Sir Apirana Ngata, played hosts to the many guests among whom was a 90-member official party from Wellington: His Excellency, the Governor-General, Sir Cyrill Newall; the Prime Minister, Mr Peter Fraser; Ministers of the Crown; Members of Parliament and of the Legislative Council; heads of the armed forces and government departments; and representatives of allied governments. The fact that the government came to Maori, and not vice versa, was a demonstration of the significance it placed not only on the occasion, but on the Tairawhiti region as one of the major recruiting points for the Maori Battalion.[4]

Rain threatened to spoil the occasion but, as more than a thousand school children gathered on the park, the skies began to clear. Joined by the adult performers, they gave the Vice-Regal party a grand welcome. Five hours of entertainment followed. Ngata introduced each group and speaker, explained the items, and kept the programme moving. His composition Haere mai ra e te Kawana e! had its first public airing, as did Tuini Ngawai’s E te Hokowhitu-a-Tu.

Members of the National Film Unit, the official Government photographer - John Pascoe, and the press documented the event. Cameramen from the US Marine Corps also headed to Ruatoria to record the event.  A large collection of photographs of the hui are held at the Museum of New Zealand Te Papa Tongarewa and film footage appears on this website here and here.

The original recordings were captured on acetate discs labelled RUA 1 to18 and Ngata Commentaries 3B, 4A-B, 7A-B, 13A (RNZA D 103798-816). The commentaries were made by Ngata four years after the Ngarimu meeting, in 1947.[5] These files are held at Sound Archives Nga Taonga Korero, a division of the New Zealand Film Archive in Christchurch.

At the hui two booklets were available which detailed the items to be performed. They list the words of the items performed and are referred to by their abbreviations NSP or SSP:

The booklets were drafted at least a month before the hui and, as it turned out, the rendition of some of the words on the day differed slightly from what was printed.

For more information about the Ngarimu VC Hui readers are referred to: