This is one of a series of interviews conducted as part of an oral and photographic history of C Company of the 28th Māori Battalion.  The project commenced in 1994 and the Nga Taonga a Nga Tama Toa Trust (Box 399, Gisborne) hold the recordings on behalf of the descendants of C Company.

Miki Harrison was born 2 May 1916 and was the son of Ned Harrison of Waipiro Bay and Pera Poutu of Wharekahika.  In the full interview Miki recounts his experiences with the Maori Battalion, from training in New Zealand in 1939 to fighting in Greece in 1941 where he was captured. He also talks about his time in Germany in a Prisoner of War camp which only ended in 1945.

The interviewer is Tamati (Tom) Fox supported by his mother's brother John McIlroy, both originally from the Waipiro Bay area.  John was with the Sixth Maori Reinforcements and caught up with the Battalion in Egypt in 1941.  Monty Soutar is on camera and Pia Pohatu is also present.  Both were members of the C Company oral and photographic research team and also from the area.  The interview took place at Miki's residence in Te Puia Springs, 24 November 1994.

Tom:  Now on the 16th of April you made contact with the enemy at Petras Pass, Mt Olympus.

Miki Harrison:  Mt Olympus.  That's right, we were, we were up at Olympus when the Germans started coming in.  We looked down at the, down and we could see them coming on the [other side of the Mavroneri Gorge]. That's where Paiki and, not Paiki, Percy [Goldsmith] we were looking at ... and we saw two lizards (John: Ae, he tino tohu pai. (Yes, that's a favourable omen) on a branch, whaiwhai ana, whai haeretanga te (chasing each other, the [green one] was chasing the), what's the colour of our uniform?

Miki: Look at that and that's what happened.

John:  Ae, tērā pea te mea, te mea te lizard tonu, kai te ngaro tonu te tohu, kāre tēnei i te tohu pai. Kai te mohio koe te taima i mate ai a Mum, nē? Arā mātau i Tōrere, māua, māua ko te fulla Harold Drake.  "E tā, Harold, kaua."  Awhina te katakata mai I tua mai i Tōrere i rō manuka nei na, yeah. And i te kōrero tāna ki a Mum, you know, "Tukuna." Kāre i tino pai ki a rātau. Hika, not long, ka mate te old lady. Mmm. Tēnā tohu tēnā ... I never forget that(?)
(Yes, perhaps that thing, the lizard, we've lost its meaning, for this was not a portent of good. You recall the time Mum died, eh? There we were at Tōrere, Harold Drake and I. "E tā, Harold, don't [do that to the lizard]." I was laughing with him. [This was] on the other side of Tōrere in this manuka grove, yeah.  And he was talking to Mum, you know, [and she said,] "Let it go." They did not like it. Well, not long after the old lady died. Mmm. That's that ... I never forget that.(?)

Miki:  Bloody kaitiaki (spiritual guardians) was there all around.

John: Engari, he tohu pai wēnā. (However those are good omens.)

John: Ko Percy tonu pea tētahi o koutou i mate i runga i te pōti rānei. A Percy Goldsmith rā?  (Was Percy one of those who died on the boat? Percy Goldsmith.)

Miki:  Ko Percy (Percy said), "Come on shoot me".  (Tom: Go on, eh).  And another Pommie boy came crawling up.  All his hands were shattered and half of his face here was taken off.  And I thought, well, if I have to shoot you, I have to shoot him too.   I don't want two on my hands.  It's a thing that, well I thought at that time, if I shoot him it will stay here for the rest of my life.  Even now and again I hear that, i a ia e karanga ana (him calling to me), ‘Brother, brother, shoot me!'

Tom: Still haunts you now, eh? Comes back to you.

John:  Tangi Ehau told me everything about that, you know that when they got bombed.  Oh yeah, it must've been bad.

Miki:  So I turned away from him and I could hear him, "You gutless bastard."

John:  Kua mohio aia, kua mutu kē, eh? (He must have known he was finished, eh?) Must've been.

Tom:  And he died.  Was the whole stomach here blown out?

John:  You never forget those things, eh? Once you see them, they're always there.

John:  Koirā i kōrero nei a Tangi ki ahau, Tangi Ehau, koia hoki tētahi.  Kāhia hoki te pōti
(That's what Tangi told me, Tangi Ehau, he was one of them.  The boat was on fire).

Miki:  He's the one I always think of, you know now and again, i hurihuri haere [ngā whakaaro] (when your mind wanders), always thinking, I'll never forget.

Miki:  At Athens, the Port of Athens,

The portions of the transcript with (?) after the text were difficult to transcribe or translate.  If any user is able to determine what is being said, please contact us at [email protected]

Read more about the Hellas, which was bombed at the Port of Piraeus, Athens.

Nga Taonga a Nga Tamatoa Trust
This excerpt has been reproduced with the permission of Sonia Clarke daughter of Miki Harrison.

One of a series of interviews conducted as part of an oral and photographic history of C Company of the 28th Maori Battalion.  The project commenced in 1994 and the Nga Taonga a Nga Tama Toa Trust (Box 399, Gisborne) hold the recordings on behalf of the descendants of C Company.

In the full interview Arthur Brooking recounts his experiences with the Maori Battalion, from training in New Zealand in 1940 to fighting in Greece and Crete in 1941 where he was captured. He also talks about his time in Germany in a Prisoner of War camp which only ended in 1945.

He patai: He uaua?

He patai: He aha ou whakaaro i aua wā?  Mataku?  He aha rānei?

We were told, "We got to board the ship to go somewhere, destiny unknown."  Yeah, yea, we did not know where we were going but it finished up it was Athens.  So we went there and right up to the area we were to go -Mt Olympus, that is, we were based at the entrance to Olympus.  I think we were there [i.e. Katerini] three days, preparing to go up about 20 miles away where Olympus Pass begins.  That's where we took our photo [at Katerini].  See Battalion Headquarters photo  I don't know where I was when the photo was taken [?].

That place Olympus Pass was big and black.  On one part on the left hand side there was a no exit road.  That's where I was, we went there. Each company was positioned alongside each other, eh. Then further along there were other companies of the 21st, 22nd and 23rd [Battalions], yeah, from the beginning of that mountain it climbs upwards and we were right at the end, the 28th.  Well, there was no road, there was no road by which we could withdraw for the Germans were already approaching where the pass road commences.

The fighting started there and gradually spread until it reached us, oh well the boys were there to welcome it.

Question: Was it difficult?

Yes, it was difficult. There was fog at the time, the time that we arrived.  When it cleared we got ready.  The enemy climbed up [towards us].  They were trying to get over our wire, barb wire. D Company was the last one there.  The group from D Company.  They're the ones who suffered casualties during that battle, they were the first, [most of the casualties] were the Fourth [Reinforcements].

Question: Were the enemy Germans?

[Yes] Germans who had climbed up [to D Company's positions].  Yeah.  They fought each other [?].  The fighting began [?] lower down [the mountain] and it gradually proceeded upwards.  It was a great place, a large forested mountain. The thing we were told was "We had to, you know, fight to the finish."  That's what the talk was.  Man!  Oh well, some time after that a runner was sent to tell us to "withdraw."

Well some of those in the trenches were killed outright, that is, the D Company trenches. They died there at the time.  It was foggy.  When the fog lifted we could see the enemy.  Yes.  Now, there was no road by which we could withdraw other than the road by which we had arrived.  Well, when we were told we were evacuating that's when we climbed up over Olympus in the dark.  There's the transport, the mountain starts off like this. Olympus is here, the main road is there, and we are here. There was no other road available.  And we couldn't use the main road because the Germans had reached it.

So we withdrew to embark via the sea.  I remember the time my mate and I were told by the officer - the doctor.  He said to us "We will have to go.  But I want you and Moana to take all the things, medical boxes, and everything."  Well, we left in the dark.  We were carrying in the dark.  Moana Ngarimu and I were detailed to carry everything to the other side of Olympus where there were roads and where transport was waiting.

Oh well, after that, there were Australians who picked up the line there, and we went beyond them and other units I think, and we took up new positions.  One place where we took up a position there was the rearguard, near Corinth.  There Moana said to me, "Mate, lets go and have a wash."  Well, badly needed as we slept in our clothes, they were your blanket. When you slept you sought/dug out a place with your bayonet.  When it rained the water ran [in].  You had no blanket, nothing at all.  At the end of the day, your coat was all you had.  It was like that all the way to Crete.

Question: What were you thinking at the time?  Were you frightened or not?

Question: Or to think about it?

The bombs to watch out for were the bombs intended for us.  I won't forget how to judge how far away they were [?].  When you heard those things whistling we would be told, "Get down."

The portions of the transcript with [?] after the text were difficult to transcribe or translate.  If any user is able to determine what is being said, please contact us at [email protected]

Nga Taonga a Nga Tama Toa Trust.
This excerpt has been reproduced with the permission of both Arthur Brooking and his family. 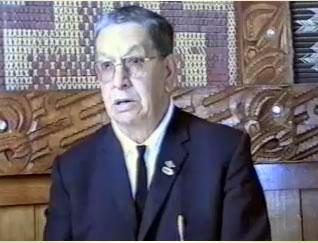