Remana Kiriwai Te Hana (known as Lemon) was the son of Hopaea Te Hana (nee Tahiwi) and Pirika Te Hana.  His father was of Ngāti Ngarongo hapū of Ngāti Raukawa, whilst his mother was of Ngāti Maiotaki hapū of Ngāti Raukawa and of Te Arawa.   Remana was born in Ōtaki on 11 May 1919.  Remana was the nickname of his father Pirika, whilst Kiriwai was a tupuna name from his father’s whakapapa.

Remana was christened in Rangiātea Church, Ōtaki on 7 September 1919. His Godparents were his Uncle Pirimi Tahiwi, Hemi Rikihana and Nurse Lewis.  His siblings were Hawea Te Hana, Rangiwhaea Te Hana, Miria Te Hana, Ngamataa Te Hana and Hineiwi Te Hana.   His youngest sister was born after their father died at aged 37 leaving his mother a widow at a young age.  His mother later became the whangaii mother to his first cousin Whatumairangi (Sam) Tahiwi, who joined their whanau at age 4 following the death of his own mother Ria Nora Baker.

Remana was educated at the Ōtaki Native College (now the site of Te Wananga o Raukawa) alongside his cousins and childhood friends Whatumairangi Tahiwi and Paddy Rikihana.  Manu Bennett (later Rev. Manu Bennett) was one of their classmates.

Remana received his certificate in competency  from the inspector of Native Schools as a student of Ōtaki Native College on 30 November 1934. He then went to work on a local farmsin Ōtaki.

In 1943 Remana was called to active service and sent  to Waiouru and Kaikohe for training before being deployed to Italy, arriving in October 1943 as part of the 28th Māori Battalion.

Remana’s maternal Uncles Pirimi Tahiwi and Henare Tahiwi had been members of the New Zealand (Māori) Pioneer Battalion who had fought at Gallipoli.  Captains Pirimi Tahiwi and Roger Dansey had lead the charge at Sari Bair, with the Ngāti Toa Rangatira  haka ‘Ka Mate, ka Mate.”

His Uncle Pirimi was later shot in the neck on the beach at Gallipoli and credits his Te Rangihiroa (Peter) Buck (who like him was former Te Aute College student)  with saving his life by stemming the flow of blood by inserting his finger into the neck wound.

Pirimi was one of 89 Māori wounded in the attack.   Pirimi was evacuated to hospital in England before returning to active service in August 1916 in France where he was appointed Company Commander.  He returned to New Zealand in 1917 where he trained reinforcements before returning to the Western Front where he served until the end of World War I.  Pirimi was selected by the NZ High Commission in London to lead the NZ troops in the London Parade following the end of World War I.

As part of the 28th Māori Battalion, Remana fought at the battle of Cassino, before heading north to Florence, Rimini and Faenza.  Remana was killed in active service in 11 April 1945 less than a month before German forces capitulated in Italy on 2 May 1945.

Remana was one of  230 of the 28th Māori Battalion soldiers killed during the Italy Campaign.

Remana was posthumously awarded the 1939-45 Star for the Battle of Britain, The Italy Star, The War Medal 1939-1945 and the NZ War Service Medal. His mother Hopaea was offered the New Zealand Memorial Cross issued to widows and mothers of NZ servicemen who were killed or died as a result of active service during WWII.

A memorial stone was later laid  just outside of the door of Rangiātea Church within Rangiātea urupa Ōtaki next to his sister, by his family.

Remana’s name and memory lives on through other whanau members who  have borne and continue to bear his name including:

Kei warewaretia tātou i a rātou
Lest we forget 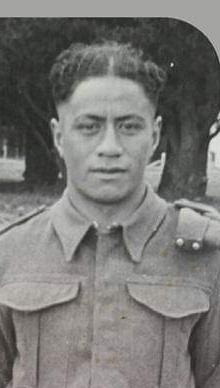