Monty died on 29th October 1988 aged 70, and was buried with military honours in the Soldiers' Plot, Rotorua Cemetery.

He was the youngest child of Eruera and Miriama Wikiriwhi and was born at Whakarewarewa on 4th April 1918 of Tuhourangi decent. He was educated at Whakarewarewa Maori School where he won a Makarini Scholarship which took him to Te Aute College.

Monty returned to Rotorua when his mother died and eventually journeyed to the East Coast where he became a shepherd on the 'Te Po' station at Whangaparaoa. He was there when war was declared and enlisted with 'C' Company boys. However in camp at Palmerston North Captain Rangi Royal recognised Monty as a Rotorua boy and promptly claimed him for 'B' Company.

Monty Wikiriwhi, except when he returned to 'B' Company for the Italian Campaign, served most of his time with the Intelligence Section of Battalion Headquarters. He was Battalion Intelligence Officer at Takrouna when he was awarded the DSO (one of only two New Zealand Lieutenants to be so honoured). Monty commanded 'B' Company during the first attack on Cassino, February 1944. He was badly wounded and left behind (by his own orders) when his company eventually withdrew. He crawled back to 24 Battalion lines the next day.

While convalescing in Burwood Hospital Monty and other Maori boys were visited by Charles Upham VC & Bar who had graduated from Lincoln College and who recommended Monty to take a course there. This Monty did and graduated as a Rural Valuer with a Diploma in Farm Management. His qualification led to his employment by the Maori Affairs Dept. as a Farm Supervisor at Ruatoki, Whangarei and Pukekohe. He later joined the Welfare Staff of Maori Affairs in Auckland from which position he retired in 1976.

In spite of constantly recurring trouble with his leg Monty was ever the sportsman, excelling particularly in table tennis and golf. In the latter game he got his handicap down to single figures.

Monty was a Rotarian in his Pukekohe days. He was an enthusiastic member of the Wingies & Limbies Association as well as being intimately concerned in Maori and RSA activities. Monty was Honorary Secretary of our Maori Battalion Association at its inception in the 1950's.

A highlight of Monty's latter days was the invitation by TV Granada to participate in a special ceremony at Cassino. There it was that in 1985 he and his wife Jean along with representatives of most other units, Allies and Axis, that had fought there were able to recall and relive these stirring and sadly memorable days. 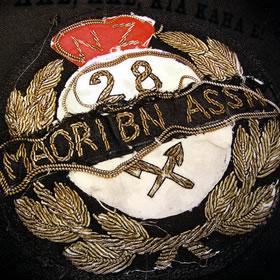