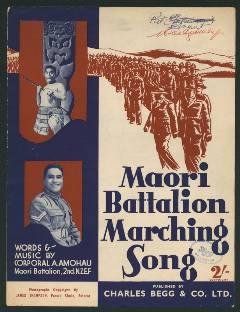 Below is a quote written by Brigadier M C Fairbrother,CBE,DSO,ED

This quote is in the Foreword of the book, Italy Volume II "From Cassino To Trieste" written by Robin Kay  Of the Official History of New Zealand in the Second World War 1939-45

The " family atmosphere" of the 2nd NZEF was one of its outstanding features. One popular branch of this family was the Maori Battalion, serving as a combatant unit as distinct from the Maori Pioneer Battalion of the First World War. The Maori were cheerfull, light-hearted, willing and full of zest. But they were stern warriors and seldom failed to gain their objectives in an attack. Out of action some of them were a trial at times to authorities. But on the battlefield at many a crucial point they did great service.