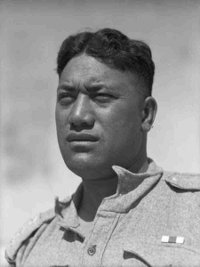 Lieutenant Colonel Arapeta Awatere gives the opening speech at the reunion of ex-service personnel at Uepohatu Marae in 1947.  See the programme here.

[beginning indecipherable]...Ladies and gentlemen, we are gathered here tonight for this special reunion of ex-service personnel, to commemorate the official opening of Uepohatu War Memorial Hall.  A memorial dedicated to the memory of peoples of both races and of both sexes who served in the war of yesterday and yester year.

Today the Ngati Porou people who are acting as your hosts on this auspicious occasion, welcome you, to this outpost of New Zealand. A place which is very dear to our hearts because it is a place where all the people try to do their upmost to meet any difficulty or any occasion which the country may demand at any time. So from the tip of old Hikurangi mountain, the Olympus of Maoridom, right down this famous Waiapu valley.  All the voices of our kaumatuas who have gone, who are buried in their graves, mingle with our voices, the voices of their descendants today in welcoming you all, from the East, to the West, North, South – nau mai, haere mai, haere mai.

I will now call upon Captain Waipaina Awarau to give the toast, Absent comrades.  After which Lt Kaika will blow the Last Post followed by the Reveille.  And after that an item will be given by Te Hokowhitu Party ‘Arohaina Mai e te Kingi nui’.