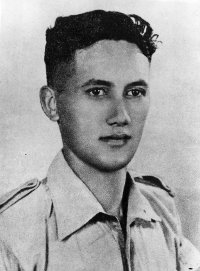 On 28 February 1943, while stationed outside Tripoli, 2/Lt Moana Ngarimu was one of a group of selected members of the Maori Battalion who broadcast messages home to New Zealand.  11 men were selected from each of the Battalion’s tribal companies to represent that company’s “tribes” and “sub-tribes” equally.  Each soldier was to prepare an appropriate 30 second greeting in writing, in Maori or English, preferably in Maori.  Details referring to this were noted in Routine Order 22 on 26th February 1943 and this personnel list on the 28th of the same month.  The recipient, for whom the message was intended, was also to be stated.  These written greetings had to be submitted to Headquarters two days prior to the broadcast.

Ngarimu was killed 27 days after making the recording during the battle for Point 209 at Tebaga Gap, Tunisia.  He was posthumously awarded the Victoria Cross for his bravery, the first and only VC that went to a Maori in the Second World War.

[Site editors note: There is significant static throughout the whole recording]

Radio announcer:  Next a message for Mrs H. Ngarimu, at Ruatoria, from Lieutenant M.N. Ngarimu.

Greetings to the Ngati Porou and Whanau-a-Apanui tribes. Greetings to the people of Waipiro, Whareponga, Hiruharama, Ruatorea and Tuparoa. Greetings also to the rest of my kinsmen on the East Coast.
I also pay tribute to those who have passed on at home and to my comrades in arms who have fallen in battle. I wish to remember those who have been killed in action, are missing, and the wounded. Mourn for them as we mourn on foreign shores. The morale of C Company is good at the moment. The men are well in Tripoli.
But as always, our thoughts are at home. Farewell for now, and to my family at Pohatukura my very best.

Sound file from Ngā Taonga Sound & Vision, ref: 41337. Any re-use of this audio is a breach of copyright.