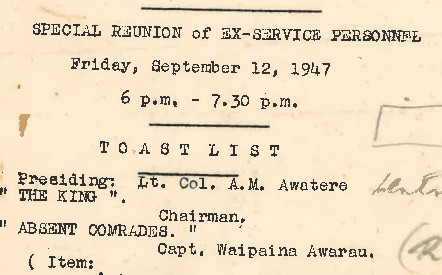 Lt-Col James Leggat (ED) gives the toast to the Armed Services at the reunion of ex-service personnel at Uepohatu Marae in 1947.  See the programme here.

Leggat served with 22 Battalion in the Second World War.  Prior to the war was a school teacher and headmaster.  On his return he took up the position of headmaster at Gisborne High School.

This is a toast that in such a gathering as this, you won’t need much incentive from me. You either are or have been members of the Armed Services. And with no encouragement from me there will be no stint or lack of enthusiasm in honouring the toast. Coupled with this toast are the names of Lady Freyberg and Colonel Dittmer. Colonel Dittmer, Colonel Dittmer’s name will always be linked with that of the Maori Battalion. (cheers) He is the Pakeha who shaped it first and gave it direction with what results you all know.  At first as some of the boys know he was relentless in the pursuit of efficiency, but he got it.  And always outside of the Battalion he was jealous and sensitive for the honour of the boys that he commanded.  No finer voice could speak for our New Zealand war effort Maori and Pakeha, Middle East and Pacific than Colonel Dittmer.

Some of the boys here might remember in the early days having to find a meal in Cairo in the Effies or Naafis.  Do you remember when the New Zealand club started?  When you could go along there and you had table cloths. When New Zealand girls came along and they spoke to you in New Zealand voices. They didn’t call out to you ‘George’ from the other side of the room. (laughter) The club that reminded you of home, where sometimes you could have whitebait, where sometimes you could have mussels – if you were lucky.  Where if you were tired of Stella you might buy New Zealand beer. All these home touches just didn’t come by themselves, they were inspired.

There, if you went to hospital, you boys will remember, the New Zealand girls who treated you in a masterly and in a masterful way they knew what you were doing. I think sometimes they even knew what you were thinking. (laughter) For all these good qualities of hard working conspicuously, of trying to do the best that could be done for the New Zealand soldier, you see represented in Lady Freyberg. (Applause) You may remember her, as I do, industriously cutting piles of ham sandwiches for the troops coming back from the desert. You might’ve known of her personal interest in every New Zealand soldier that passed through. Well ladies and gentlemen I think that in herself she epitomised all the good work New Zealand women did overseas and that was second-to-none.